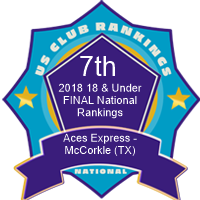 Or, if you cannot add HTML on your website, you can use the following image using your website management system

7)     Aces Express – Coach Dave McCorkle
With an organizational motto of “Attitude and Effort” it’s no wonder the Aces Express teams have been on the rise.  With a club best 3rd place finish in the Fireworks Power Pools and another 3rd place finish in the TC/USA Nationals, Dave McCorkle has a Texas program worth watching.  Making the jump from No. 9 to No. 7 embodies the word effort, and the respect for the game shows attitude is in fact controllable.

The 2019 roster is hungry to keep improving their standing, and most of them are finding homes in Texas for their college career.  Texas A&M, Corpus Christi, Stephen F Austin and UT San Antonio to name a few will be gaining players who know what it is to work hard to help programs grow.  “Attitude and Effort” remains not only a team motto but a statement worthy of future champions.

Aces Express started in 2009 by David McCorkle (Texas Express) and Dan Hale (Texas Aces) in Sugar Land, Texas.  After both had built successful teams, they joined forces to create one team, the Aces Express.  They built the team on the foundation of Attitude & Effort, and now has strategically grown to about 16 total teams in the program.  Aces Express keeps the number of teams to a minimum and only has teams local to the Sugar Land/ SW Houston area.  All teams and coaches work very closely together throughout the year, and always have a very close knit family atmosphere within the program.  The team will attend Fireworks, TC/USA Nationals, PGF Premier,

The summer lineup will consist of any 9 of these players: